A Legacy of a Misspent Youth

Posted on October 25, 2018 by jonathanfeinstein

Back in the dim, dark days when dinosaurs made for the best computers to play games on, I was invited to be one of the play testers for “Wizardry IV: The Return of Werdna.” That came about because the guy writing the scenario  for Sir Tech (Roe R. Adams III)  was someone I had met in the Society for Creative Anachronism, Inc. (aka the SCA) and on learning that I enjoyed playing computer games and had especially enjoyed the first three games of that series… well, I think you get the picture.

Anyway, I play tested on an Apple IIc and did not manage to finish the game before the play-testing period was over because The Return of Werdna is arguably the ingeniously nastiest, most difficult and frustrating computer game ever to grace the world of gamers. (That’s a compliment, by the way).

I kept playing after it was released and eventually, my Apple IIc died and for a long time I was unable to play the game at all, having switched to a PC (and not wanting to go out and buy a new copy of the game – and actually I think, by then, it was no longer available in any normal venue – keep in mind that things like the World Wide Web and eBay were not yet a thing (hmm, perhaps the Web may have been, but I doubt there were any commercial sites yet… remember what I said about big scaly lizards two paragraphs ago.)

So a couple years ago I found I could download the game for free as it seems to have passed into the realm of abandonware (and if not, I probably owe Robert Woodhead a sushi dinner or something).  That time I managed to get out of the Dungeon (I was so close but was lacking the “Holy Hand Grenade of Aunty Ock” when I needed it during play testing and did not discover that until I played on the PC) and then life got in the way… like it does… and by the time I wanted to go back, I’d replaced the computer it was on (and like a dolt, I did not save the files when I transferred data over), so I still had not reached any of the endings other than dying a heck of a lot (and being thankful there was a save feature).

So, recently I decided to try again because I really did want to get to the ending and, well… I’m a sucker for that sort of punishment. Now if you want to try the game for yourself, find a nice virus-free web site you can download the game from and run it on a good DOS emulator (because this came out back in the days of Windows 1 or 2… if that). I recommend DFend Reloaded, by the way. A few years ago you might have had to load up DOSBox and then DFend and get them working  together (DFend was written as a front end to DOSBox and it was a pretty good one, but there could be issues), but the newer DFend Reloaded includes both so you can just install it and toss in the DOS programs you want to run. I would give better directions, but it is not hard to find more official ones. Use Google or Bing.

Anyway, so I , as Werdna, woke up dead yet again and started clawing my way upward and out of the dungeon. I remembered almost everything (actually I got all the essentials I was looking for) and finally started poking about Level 0 (aka the sleepy little hamlet of Llygamon known for the Training Grounds, Boltac’s Trading Post and a castle. All that took me a while, but if you’re looking for hints or a walk-through those are available too (this is a legendary game after all).

I blew though the House von Halstern squires easily, made the mistake of trying to shoplift at Boltac’s and then finally got around to  poking my nose around town. That’s when I got killed by myself.

Uh huh! I did not realize that Roe had written me into the game. Look here: 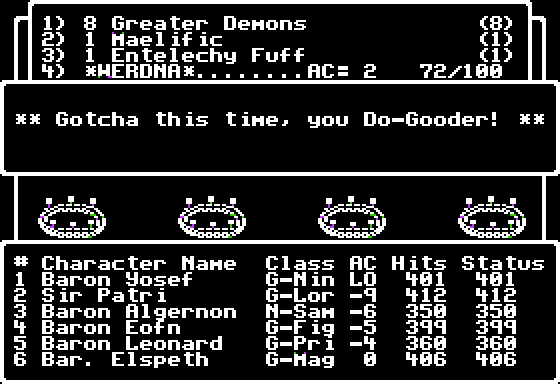 See that guy in the #1 spot. That’s me. In the SCA I am known as Yosef Alaric.

On modern machines the fight flashes past too fast to read it all, so I may not have been the cause of my own death that time around, since Baroness Elspeth cast a Tiltowait spell at me. The Tiltowait is described as having the power of a small nuclear explosion. I would take issue with that as a lot of attackers seem to just shrug it off, but hey, it’s a game, right? The shock was seeing my own name on the screen when I was not expecting it. (My real name, btw, is listed as one of the fifteen play testers in the official game manual, as close to immortality as I am likely to come… it lasted a little over 15 minutes, I think)

Oh sure if you have never heard of the East Kingdom of the SCA or have no acquaintance with some of the leading personalities in the latter half of the 1980’s, none of these names might by familiar, but just to show it is not a coincidence of names, you might see this screen if you come at them in a different manner: 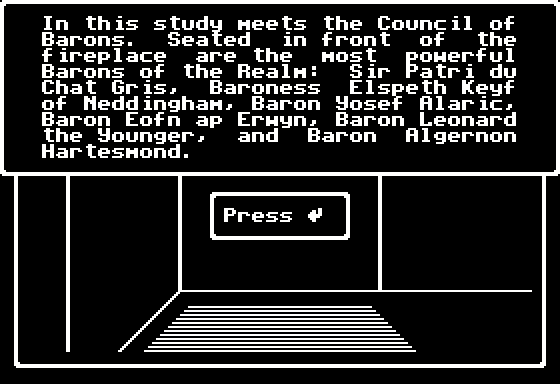 I’m not in first place this time around, but I’m there. I won’t explain the joke, it would take too long, but for some reason Roe decided to make me a ninja. My friends in the Dark Horde may never let me live that down.

Anyway, I still have not finished the game, but I hope to soon.

4 Responses to A Legacy of a Misspent Youth